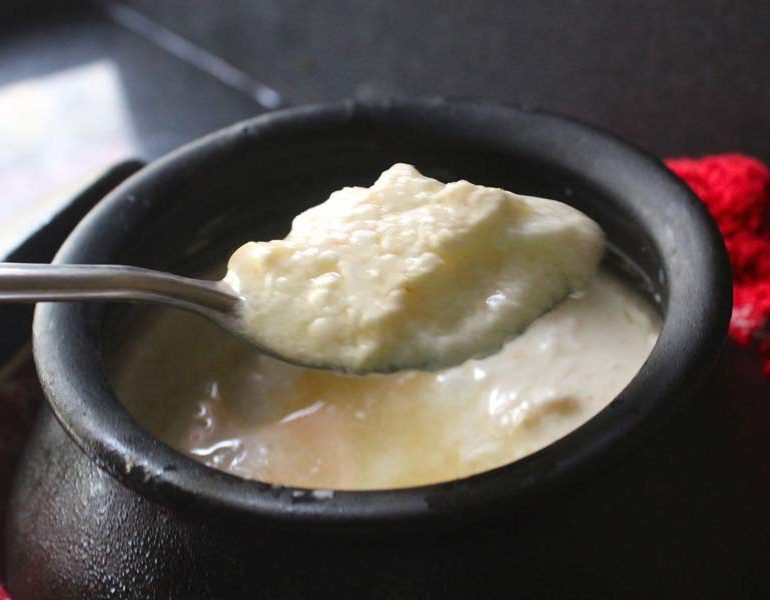 When I was a young boy yoghurt was made each day at home and my grandmother would skim the cream off the top and collect it in A small container . Once some critical mass of cream was collected she would get busy and take over. Ice would be brought in. Among her belongings she had a large wooden whisk and three pieces of rope that she kept as carefully as any woodsman would have kept his axe. These would be brought out and the cream would go into a tall metal vessel which would sit in a bath of iced water and the whisk would be harnessed to the table leg and she would sit on the floor with one leg crossed and the other stretched out and endlessly churn the cream back and forth. The children in the house would all hover about and wait for that magic moment when : voila ! There would be lumps of butter floating in the buttermilk. It did seem magical to me as I could never see anything happening except froth on the white liquid until suddenly there would be butter. She would call all of us and give us each a small lump of butter to eat.

With lunch that day there would be butter milk : neer moru. And later that day the butter would be melted and made into ghee. We Would all be given a bit of rice mixed with the burnt milk solids that would collect at the bottom of the pan. Leaves from the drumstick tree would be used to flavor the ghee and we would get a bit of fried leaves with the rice. Yum. Very special.

As we later got a fridge it would be full of small containers of yoghurt, buttermilk and cream of various vintages. Woe to anyone who used the wrong one!