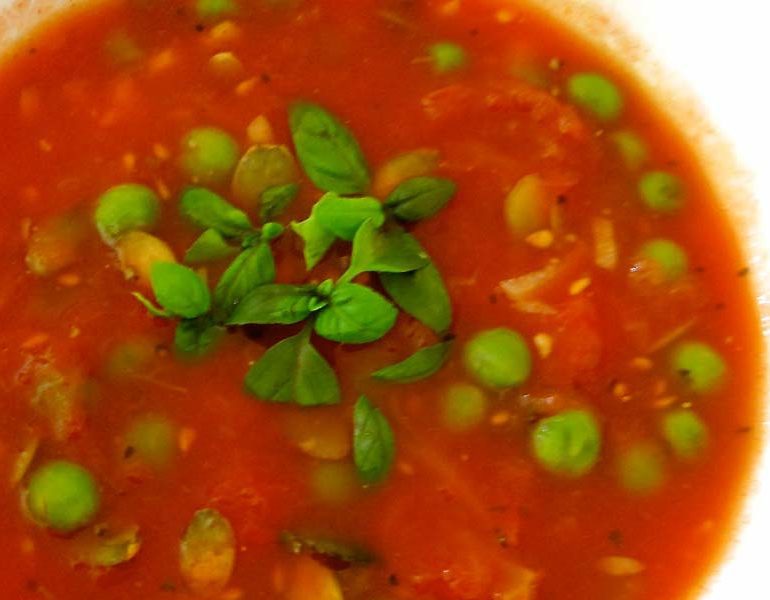 My first column on cooking has been published this month in The ARTery. Check it out below. And yes they have some articles on other art forms as well. Enjoy and post your comments on this page or on their page. South Indian Cuisine; It’s Art Now. 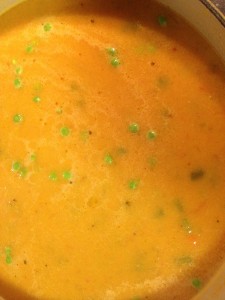 When I was growing up in Adyar, my mother would make a very special tomato soup. This would only happen on very rare occasions when she found big ‘Bangalore tomato’ at the market and was feeling lavish enough to buy them. Usually it meant that some European or Theosophy type, or both, was coming to dinner. There would be a big commotion in the kitchen and numerous vessels would be used. The tomatoes would be blanched, peeled and mashed and then strained. Other vegetables like beans and carrots would be finely cut and steamed in the big multi deck “cooker paatram” she had. Stock made with toor dal (paruppu jalam) would be added to her largest cooking vessel. In with the mashed tomatoes and then the vegetables would be added. The soup would be stirred with a reverence usually reserved for coffee in the South Indian household. Shelled peas, seasonally available only in Mambalam and worth a king’s ransom, would be added at the end. The soup would be salted and fresh pepper was added. And, as the final coup de grace, my mother would stir in fresh coconut milk which had been extracted in two sessions from a hapless coconut.

The soup would be served in the plastic bowls reserved for such occasions with a dollop of butter on top. I suspect there was more to it than that. But this is what I remember. And there would never be any left over.

Since moving to the West, and having suffered cold English soups along the way, I have been making my own winter soups seasonally and have experimented with a number of soups. They are fun and easy to make and nothing is quite as satisfying as a hot soup on a cold night or a cold soup on a muggy day. Be bold and experiment with whatever is available and don’t fear mistakes. I had one colossal mistake when I tried to make a greens soup with an assortment of spinach dropped off by a gardening enthusiast. I remember trying to eat the green slime for three days before I had the heart to toss it. Ah. Those were college days. 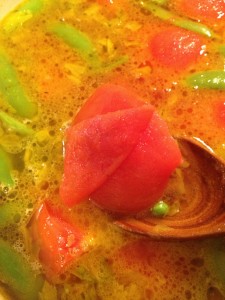 Cream Of Tomato and Peas Soup – Boil 1/2 cup of mixed toor and/or masoor dal in 6 cups of water or in a pressure cooker with a pinch of turmeric, one dry chili and an optional pinch of hing. Sauté onions and bell peppers adding some fresh ground pepper and turmeric, ground cumin, some fresh mint and oregano, or coriander. Add available vegetables like chopped celery, carrots and 2 potatoes and a few ripe tomatoes. Add the cooked lentils and water. Bring this to a boil. Cover and simmer on low heat for 20 min. Allow to cool a bit and drain the liquid. Now purée the vegetables and add them back with the liquid. Add salt to taste. Add 1/2 stick of butter and a cup of sour yogurt whipped up in a blender with a sprig of cilantro and tsp of your lime pickle or a pickled tender mango. Heat over a very low flame and serve hot with a tsp of the blended yogurt on top and some crisp bread or toast.

This same soup can be served chilled by increasing the amount yogurt. Add a cup of finely diced cucumber bits. Garnish with a pinch of chopped cilantro and mint or fresh dill.

Try your own variations. Making soup is much like alapana. Available ingredients, the mood of the moment, the guests and that little extra something that Tamils call “kai manam”.